skip to main | skip to sidebar

A Land of Deep Colours


In October 2007, reality for me was a hot and dusty . To travel to green and lush Kerala at that time became an escape into magic land. And there was this almost direct flight with just a half-hour stop at Chennai, all the way from to Thiruvananthapuram.

Yes, I can write and pronounce that tongue twister name of the capital city of .

Kerala is green. Rubber, coconut, banana and areca nut trees are what you see for miles and miles. And if you look beyond the trees, you see beaches with the waters a hazy blue, green, grey, orange, and even muddy. It all depends on the time of the day, the location, and your viewpoint. There are hills in the distant, the , not very high and therefore beckoning. There are rivers that flow into the sea and waterfalls like Meenmutty. This has a stone-moss-lined trekking path leading to it overhung with green shade. The River Kallar meanders gently alongside. Here you may be bitten sharp by a mosquito or two, watch a six inch black centipede crawl leisurely by and see an ant nest on a tree. The wonders of the natural world are laid out on a platter.

Kerala is red. Small red bananas hang in bunches from long stalks in roadside stalls and are unbelievably sweet when eaten. Red coconuts have cool, refreshing water to help you beat the humidity and the white flesh scraped from their insides melts in your mouth. Areca nuts redden your lips. Small red flowers are strung in the well-oiled plaits of the young girls like a long forgotten fashion idea. The rows of red tiled roofs shield old-fashioned houses from the sun. There are not many glass-fronted skyscrapers yet on the landscape. The inescapable red communist flags line some of the streets, making their own statement.

Kerala is black. The black soil at Kovalam, rich in minerals, is washed onto the beach. Black boat houses and canoes rock steadily in the waters. There is the black of the mountains, visible where they have been cut away. The gods are black too, hewn out of granite. In the Padmanabhaswamy temple at Thiruvananthapuram, it is a granite Vishnu that reclines so hugely that he is viewed across three doorways, his black arm flung across to bless the worshippers, adorned with a thick gold bracelet that shines in the darkened interior and highlights the beauty of its form. There is the darkening black of the clouds, when the thunder clouds pour forth their bounty with unrelenting fury and make the land what it is. The people have a smooth ebony colouring, accentuated by the stark whiteness of their crisp shirts.

This land of deep colours and deeper tranquility helped me escape from the blinding daylight starkness and neon-lit nocturnal existence of . Kerala is a return to the basics, where life flows on in the backwaters of beyond. 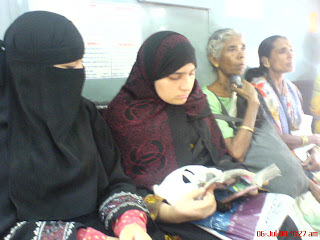 I visited Mumbai after decades, hey, don’t go guessing my age, there are better things to do.

I fell in love with city.

Mumbai is rocking late at night. Thanks to the sea breeze that cools the most heated soul and asks them to stroll down Marine Drive to enjoy nature’s gift, away from cramped tenements and trains full of teeming travellers. It is the sea that makes the trade-off between industry and space bearable.

Mumbai is spiced curry at its best. Thanks to a cooked cauldron of cultures that sits a fair, plump Bohri Muslim in an embroidered black burqa who reads a quick magazine next to a multi-nose pinned, necklaced, Maharashtrian with crooked teeth, a big bindi, and weathered skin listening to music with a hands-free to her ear— on a train seat from Bandra to V.T. station. Thanks to the cafes like Mondegar that line Colaba Causeway where “because I am worth it” women wear low waisted, very blue jeans and drink beer late at night to the sound of Western folk music, even as the black and yellow out-dated Fiat cabs with stuffy, blue velvet seats and the red ‘Best’ buses ply the streets outside. Mumbai offers you cheap vada paos and bhel on and the mouth-watering, though high priced fruits at Breach Candy that can make the most satiated mouths drool. It has ‘cutting’ chai that you can have ‘dhai-dhai’ (fast) before you catch that train to somewhere, since Mumbai has a train service that everyone travels by. So when the heavens sing their megh malhar and the rains pour, its no-show at the offices, and everyone has to understand, because the trains cannot run from Borivali and Andheri to Tardoe or elsewhere when the homes and tracks are wet and inundated. Here, the language has its own mix, where the ‘darlings’ heard at Cusrow Baug are interspersed with the ‘kai ko’ sounds of Matunga, and the cauldron continues to spice up its curry.

Mumbai is mannered. Polite men move their arms out of the way so that women in a hurry do not collide with them, an ability of manners sorely lacking in the aggressive north [where women are taken head- on and have to themselves steer clear if they want to, regardless of high heels, shopping bags, screeching kids in arms and usually excessive weight]. Those catching a bus have to stand in a serpentine line that is not straight like a Chinaman’s pigtail, but is more like a ‘z’ at the end of which you may board the bus, one after the other, please. There is no pushing or pulling here. I did not know this, and played by the aggressive rules of , getting ahead and putting one foot on the waiting bus, waiting to be pushed in by the others, when a voice behind me asked me to get to the end of the queue. What queue? I looked around and, of course, in my hurry to catch the bus I had not spotted the people standing in line patiently in the heat of the mid-day sun. My face red and a stupid smile on my face for apology, I went and stood at the end like a punished student who speaks out of turn. But this kind of well-mannered queue-ism is unheard of in for sure.

Mumbai has a —a far cry from the high-end Champs Elysees of Paris, but one that may definitely be compared to the Janpath of Delhi for cheap clothes, footwear, bags etc. Most goods can be bargained for and the prices brought down to half the quoted strength. Yes, I have tried it and it works. So you make up with quantity when you are not looking for exceptional quality, and the bargaining also lifts your spirits because you believe you have emerged a victor after a blood-thirsty battle of prices. And then you suddenly feel exhausted with all that energy spent in haggling, and move to the for a pint of beer in artistically ethnic surroundings to lift your spirits once again. The has been there for donkey’s ears, because I had visited it decades ago as well. A kind of nostalgia gripped me and I was surprised, because it had not happened to me in other places at all.

Another surprise. Mumbai has a highly developed sense of community and environment consciousness. Well-heeled gentlemen take the train to their offices instead of a cab or a private car. There are several reasons for this. One, they reach their offices faster. Two, Mumbai people are, despite their wealth, careful with their money. This can be because they still belong to the old school of thought that if you have it, don’t flaunt it. The most baffling reason for a person like me from is their community and environment consciousness. The rich will take the train because they do not want to add to the city’s pollution or create traffic jams. They also do not believe that by taking the train they are coming down the social ladder in any way. Many of them also don’t run their air-conditioners unless absolutely necessary, saving on power costs of course, but also because of the increased awareness regarding CFC.

Despite the rains that pelt it announced and add to the dirt, squalor and stench as you wait for the train, clutching hard onto an umbrella and wondering why you are visiting it when you can be in a dry place called Delhi, you know that Mumbai charms you with her downpour of more than mere rain, its how her heart throbs in the midst of it all.

Posted by Abha Iyengar at 2:58 AM No comments: